We’ve been doing more etches and soldering to make the signal gantry that stands against the back wall, controlling use of the locomotive servicing track that runs against that wall all the way through to the engine house, refueling facility and turntable.

Photos of this gantry were not clear about all the features so similar gantries were identified in Joel Rosenbaum and Tom Gallo’s pdf book: Jersey Central Lines Official Photography. Steve drew the stanchion artwork and PPD then etched these for us on 0.7mm brass. Richard then used these as the basis for the gantry scratchbuilding most of the other components. Finally the arm was actuated with a servo controlled by Tam Valley Depot’s dual 3-way Servo DCC accessory decoder. This is a new approach for us and means that we can control the signal from software (Big Bear) as well as push buttons. The build is shown here as well as the result

This is our gantry compared with the prototype shot! Prototype photo by kind permission of Morning Sun Books [taken by Charles Houser Sr, The Houser Collection from page 82 of Jersey Central Lines in Color Volume 2 by William J. Brennan]. 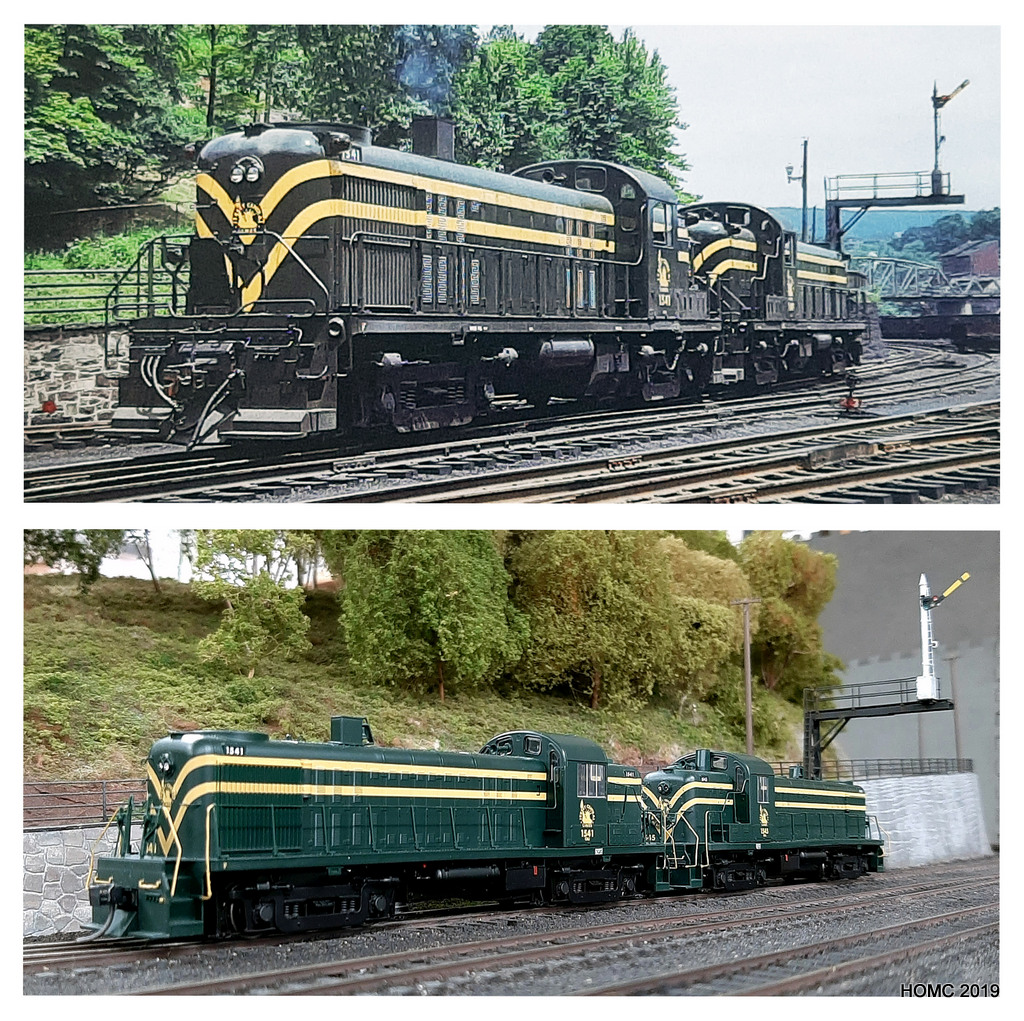 As well as this masterpiece, the hollow framework utility cable posts that can be seen in some prototype photos were drawn up by Steve, etched and then built by Richard using bullhead rail for the sides. Steve then planted them on the layout and modified a few other posts.

The trolleys get a lot of wear in transporting Mauch Chunk to exhibitions but also in supporting the other Barrowmore layout, Johnstown Road, when Mostyn is erected. We decided to strengthen the trolleys with easily removed ‘lids’ which Gavin built. This has made the trolley boxes much more rigid

We have started working again on Mauch Chunk since getting back from a succesful exhibition in Glasgow. We had two problems there that impacted on operations, although hopefully the public didn’t see anything substantially wrong.

Firstly we had overheating of the Lenz LZV100 command station. This was partly because I didn’t take the lid completely off the really useful box we’re using for the control panel. However, overheating did occur again later even when the box was completely open. Clearly passive air cooling isn’t enough when we are operating so intensively for 7 – 8h periods.

To remedy this, Gavin has put a fan in one end of the box, holes in the other and reorganised the interior to allow a good airflow. The Lenz LZV100 is now also mounted on a hollow support to allow airflow beneath as well. It should work nicely and will allow us to leave the lid on next time!

To put the icing on the cake he (and Dave Faulkner) have also wired the block protector boards to LEDs that display when a short is occuring – this will make it much quicker to detect problems.

Secondly, we had problems with the Peco point motors (in the staging yard) misbehaving. This is likely to be due to poory alignment/positioning which has occured as a result of heavy use and the way that they operate – with a thud in each direction.

We decided to try a servo design which has a more genteel motion. As there was not enough vertical space for Tortoise motors, have gone for MP-1 point motors from MTB Model (click here) in Prague. These are supplied by DCC Train Automation in the UK (click here). To control these with DCC we also purchased Digikeijs DR4018 accessory decoders, also from DCC Train Automation (click here) which each control eight motors.

We had to include some cross-baseboard links for control to avoid wasting the channels on the accessory decoders. Although it is a pain to replace and rewire all the motors in the yard, provisionally it looks as though it will be a good investment. We will report here on our experiences.

We’re all prepared for Glasgow!

Last week we set out all the stock and tested it in new consists and configurations. Everything (well nearly…) ran well and since then several items have been further weathered. Richard’s new K1s 4-8-0 has been completed and is running and photos also show an ABBA F3 set hauling a long freight Westbound.  Other photos show the locomotive and other stock lined up in their fiddle yard roads.

Finally, the new fascia lettering is coming together!

We hope to see some of you at the Scottish Exhibition Centre on Friday through Sunday this weekend.

Work is still progressing on preparations for Glasgow – most of it in intensive sessions coinciding with Steve’s visits to Barrowmore from East Yorkshire.

Photos show Steve weathering boxcars with Pan Pastels, these were then sprayed with fixative and/or acrylic matt varnish. The spraying does fade some of the colours, particularly the brown and organge, but has the advantage of fixing them.

Richard continued making corridor connections for all the passenger cars from black card, scored and folded into concertinas then superglued to the car ends. A LOT cheaper than the commercial options and looks just as good.

Richard replaced the broken plastic handrails (they are so fine) with brass wire equivalents on half a dozen small tank cars – a substantial task. Gavin airbrushed the latest K1as camelback prior to decaling.

Finally the stock was set out to arrange train consists prior to reboxing it in the correct order. Note the new caboose tail ligthts.